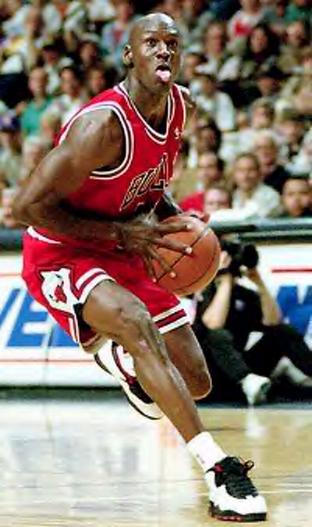 As stated last week, I said I would debut the 42 Club Tracker for the playoffs. I can’t take credit for this formula as it is a Bill Simmons creation. Simmons created the idea and it is a simple formula. You add the points, rebounds, and assists per game and requires a minimum of 13 games meaning you are kicking butt for over a month time period. Since the merger in 1976, this is the list of players that had spectacular summer performances and made their way into the 42 Club.

14 players, that’s the list since 1976. The best player ever (Michael Jordan) is on there 6 times and there are no frauds on this list. Barkley, Garnett, and Iverson’s MVP seasons make it on there. LeBron already has 3 appearances and I am sure more are to come. Just for giggles, Kobe’s last three seasons were 41.4, 41, and 40.7 respectively. Bernard’s 1984 season comes up short because he only played 12 games. Notice there is no Dr. J, David Robinson, Dominique Wilkens, Tracy McGrady.

So let’s look at the 2011 field of players (eliminated players are not included as they can’t reach the 13 game minimum).

Dwight Howard: 4, 50.0
He is putting up beastly numbers but his team is literally atrocious. I don’t know if Howard and the Magic will even get past the Hawks as they are down 3-1 right now.

Chris Paul: 4, 44.0
Ummmm….what more can be said about CP3 that hasn’t already been said. He is carrying his undermanned team against the two time defending champions. It doesn’t matter who the Lakers have on him because he is going to torch them. If the Hornets can get past the Lakers, I can definitely see CP3 making a run at the 42 Club.

LeBron James: 4, 42.8
He is on a different team with a different role that has 3 All Stars on it, but he has found a way to help his team in the counting stats and seems to be well on his way to his 4th appearance in the 42 Club. With it looking like the Heat will advance to play the Celtics, LeBron’s performance in the conference semis will determine if it does make number 4.

Kevin Durant: 4, 40.0
Durant is the youngest scoring champion in the history of the NBA at 21 and he just won it back to back to become just the 11th to do that. He has come out like gangbusters and it seems the Nuggets just don’t have someone to slow down KD. He and Westbrook have been the difference in the series thus far. He should have an opportunity to advance and play on.

Derrick Rose: 4, 39.5
Rose is the presumptive MVP this year and has had to carry the Bulls in the playoffs so far. An ankle injury slowed him but the Bulls look to close the series tonight against the Pacers.

Russell Westbrook: 4, 39.3
Westbrook is another reason the Nuggets are having issues. The two Thunder players are carrying the players and both are playing at elite levels.

Rajon Rondo: 4, 38.3
Rondo made Madison Square Garden his own personal playground with a sic triple double line on Friday night and continuing it on Sunday. He helped get the Celtics back to the conference semis.

To take a look at the playoff overview, click here.

Colin Kaepernick Would Help The Ravens On And Off The Field