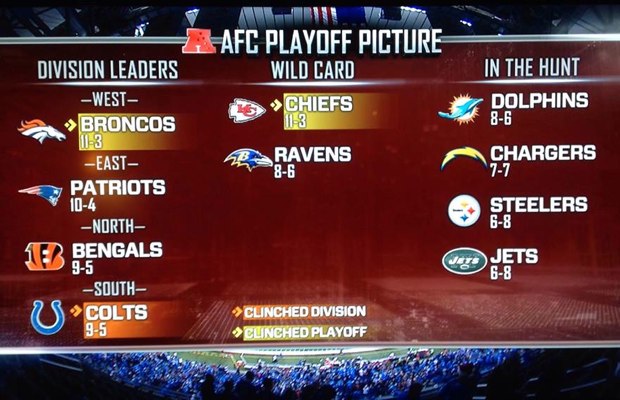 Monday night’s 18-16 win over the Detroit Lions is huge for the Baltimore Ravens. Not only does it put them in the sixth spot (second wild card) in the AFC playoff picture, but it still keeps their division crown hopes alive.

That’s right folks, if the Ravens win their final two games of the season they will win the AFC North. Who the hell woulda thunk it?

Baltimore and Miami are tied at 8-6, but the Ravens hold a tiebreaker over the Dolphins with their 26-23 victory in week five against the them. The Chargers (7-7), Steelers (6-8) and Jets (6-8) still remain in the hunt.

At 11-3, the Broncos and Chiefs have each secured playoff berths, while the Colts (9-5) have already locked up the atrocious AFC South.

The Ravens have now won four straight games and come home on Sunday to face the New England Patriots. Then they’ll wrap the 2013 regular season on the road against the division leading Cincinnati Bengals.

Crab Takes And Football: How Sweet It Is To Beat The Steelers In Pittsburgh