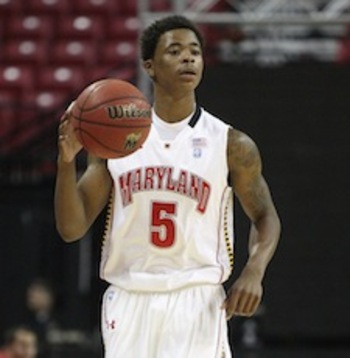 The Terps had a strong first half and were able to put away the Eagles at the Comcast Center 81-65. The Terps (15-10, 5-6) were paced by the Terrell Stoglin’s 24 points and Nick Faust with 6 assists and 5 steals. The Eagles (8-18, 3-9) trailed 41-27 at the half but opened the half with the first 6 points. However the Terps responded themselves and went on a 9-2 run to extend the lead to 50-35. The win marked Maryland’s most lopsided win of the season. Let’s get to the report card:

Nick Faust: B+
As stated above, Faust had a career high in assists and steals and did an admirable job filling in for Howard at the point. The five turnovers are a bit disconcerting but he performed well. A strong test will be in store for him on Saturday when the Terps travel to Charlottesville to play Virginia.

Terrell Stoglin: A-
Following the benching and Twitter remarks, people were concerned if Turgeon had lost Stoglin. If the game last night was any indication, the answer is no. He had 24 points and 5 three pointers to help lead the team. With the 5 threes, he passed Gary Junior for the sophomore record.

Sean Mosley B
Good Sean appeared in College Park and had 13 points, 3 assists, and 4 rebounds. His senior leadership has been a huge help to the young Terps squad and he made a point to assert himself in the first half as the Terps built their lead.

Ashton Pankey D
Brooklyn finished with 2 points and a rebound and a block but for the most part it was an unproductive 14 minutes. His value is in crashing the board and guarding the paint and cutting to the open areas as the guards drive the lane.

Berend Weijs C-
This might have been Weijs’ strongest game which says something about his season. He had 4 points, and 2 rebounds and blocks in 18 minutes. However, the bench production of Alex Len and James Padgett made up for the lack of sizzle from the starters.

Bench A-
Padgett came off the bench and didn’t miss a shot from the field (5-5) and only one from the line (5-6) to finish with 15 points and 8 rebounds. Len had 4 blocks and 9 rebounds and Mychal Parker finished with 7 points and 6 rebounds.
Sub of the Game: James Padgett

Mark Turgeon B+
Turgeon only played 8 last night following the season ending injury to Pe’Shon Howard’s ACL. He had Faust at the point predominantly who did quite well. Following the rough outing at Cameron Indoor on Saturday with Pe’Shon’s injury and Terrell Stoglin sitting the last 14 minutes, the Terps bounced back and played much better.

Current Tournament Outlook: NIT
The Terps currently sit tied for 7th in the standings with Clemson at 5-6. The Cavs and Hurricanes are a game ahead tied for 5th and NC State sits in the 4th spot at 7-4. The Terps have beaten teams they should beat and lost to teams they shouldn’t beat. Their best win is the Notre Dame win which keeps on giving but the Terps need more victories. They have 5 games (@ UVA, vs. Miami, @ GT, @UNC, vs. UVA) left to make their mark. It is not out of the realm of possibility for the Terps to grab 4 of the 5 but they also may only get 1 as well. To have any hopes of making the tournament, they need to hit the 4 mark which would put them at 19-11, 9-7 ACC. That record may not be enough to make tournament so they may also have to make at least the semis of the ACC. So I’m not saying it’s out of the realm of possibility but I’m telling you there’s a chance.

Ravens Report Card: Breaking Down The Ravens 33-14 Victory Over The New York Giants