Last year, Ubaldo Jimenez was transitioned to the bullpen due to poor command, but also because he failed to have success with his slider and curveball.  The results when transitioning to the bullpen in limited work were not impressive for developing command and/or lowering his ERA (6.75 ERA as Reliever).  However, Jimenez posted an improved K/9 and his FIP (2.01) and xFIP (3.40) was respectable as a potential reliever.

With the failures by Norris in the rotation and the success of Kevin Gausman in his last start, it appears as if Norris may be moving to the bullpen for the time being until a spot opens again in the rotation.  Let’s examine his pitch arsenal to determine whether or not he could be successful in the bullpen.

Norris throws four pitches at this time:  Four Seam Fastball (45.7%), Sinker (10.49%), Changeup (9.35%), and Slider (32.71%).  The issue with his pitches this year is that they have been hit hard with only the slider being a decent pitch based on SLG%.  It should be noted as well that the BABIP for the four seam and sinker are very high, but this mirrors a higher LD% compared to league based on Z-score (1.67 and 2.50 respectively).

The lost of effectiveness in his fastballs are a major issue this year.  Norris has shown no loss in velocity in his fastball this year and still is considered to be above average for a RH starter.  In addition, horizontal and vertical movement do not appear to be different.  However, he continues to get hammered.

The biggest issue may be due to platoon splits being awful against LHH this year compared to 2014.  Against LHH, he is posting a .617 SLG and .413 wOBA compared to his splits against RHH of .448 SLG and .330 wOBA.  Let’s examine his pitch selection against each this year: 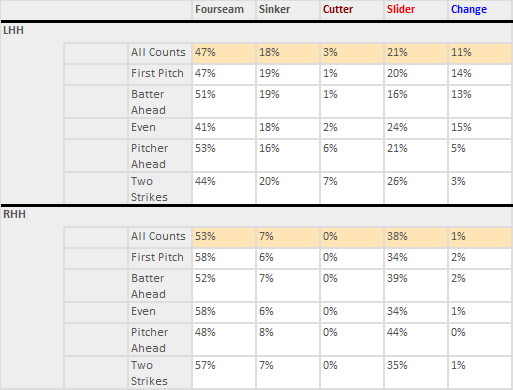 Norris goes to his sinker more significantly against LHH, but this trend is apparent in prior years.  However, his success against LHH was at a career low last year.  The most impressive numbers against LHH from 2014 comes from the use of his changeup.  He posted only a .263 SLG against LHH by effectively locating pitches low and outside to them.  Pulling up the heatmaps for the changeup is remarkable different between 2014 and 2015.  It would appear that more changeups is getting further up in the zone and back towards the middle.  The ability for Norris to have accurate command of this pitch really allowed him to succeed.  That advantage appears gone this year.

With Norris now moved into the bullpen, I also wanted to see if he has altered his pitch selection.  It appears based on the data that the changeup has been eliminated being replaced by higher usage of the slider.   It’s also interesting that Norris is initiating more sliders as the first pitch trying to fool batters expecting a fastball.  Customizing and tweaking his pitch selection could be valuable for Norris out of the pen to turn into a better strikeout pitcher and give more effectiveness to his fastball. 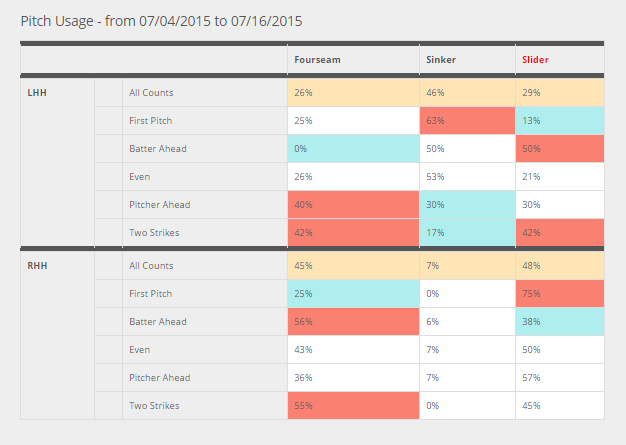 Of course, the results on the field haven’t demonstrated an improvement.  Norris continues to struggle giving up 4 ER, 2HRs, and 3 BB in only 4.2 IP.  However, the stats are primarily from onee poor outing in Minnesota on July 8th.  It’s far too early to judge Norris, but it appears the Orioles may be able to tailor him to be moderately effective in the bullpen by eliminating the changeup and focusing on the slider.

Next article What The Puck: Episode 112 – Caps Fan Fest