In 2000, the Ravens were a team of strictly defense. With a weak offense, they managed to win a Super Bowl with Trent Dilfer. Eleven years later, the Ravens still have a strong defense, and an equally strong offense. With an explosive running game, a Fu Manchu-wearing quarterback, a sack king with his own university slogan, and the same legendary linebacker as in 2000, this Ravens team has virtually all of the elements it needs to take home another trophy. But aside from the big names, what about the players who are making just as influential moves? After the jump, I’ll count down the Top 5 Breakout Ravens from this regular season…

5) Dennis Pitta/Ed Dickson. I couldn’t pick just one. These guys had a lot to live up to with the release of Todd Heap during this past offseason. Even though I did shed some tears when I learned of Heap being cut, I can’t ignore their combined stats of 8 TDs, 94 receptions and 933 yards in 2011. These two led Baltimore from yelling “Heeeeeaaaap” to “Heap Who?”

4) Terrence Cody. Cody was another young player who had to step up to the plate when a veteran (Kelly Gregg) was cut during the offseason. Not only did he devote his offseason to getting in shape and losing weight, but he gets to learn from one of the best defensive tackles in the league, Haloti Ngata. He even managed four tackles against the Bengals in Week 17 on a slightly sore ankle. In other words, he can only go up from here. 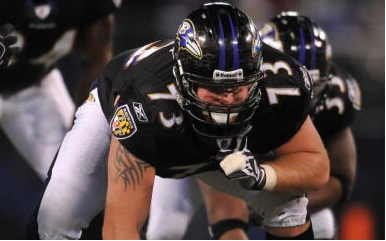 3) Marshal Yanda. See: Hulk. Even when suffering an injury (or just admitting that you had emergency calf muscle surgery on Christmas Eve and played the following week), this dude is one of the big reasons this offense is moving. The Ravens obviously expected him to do well in 2011 with the huge signing during the offseason, but I don’t think anyone could have predicted Yanda to handle this season with such tenacity.

2) Torrey Smith. If you haven’t already guessed, I’m a huge Torrey Smith fan. Looking at his chemistry with Flacco, you would have thought they had been playing together for years, let alone only a few months. Not to mention he is fast, fast, fast. So far, this kid has 841 yards, 7 TDs (a rookie record – including a certain game-winner), and an amazing post-season and career ahead of him.

1) Lardarius Webb. It seems that almost every game, this guy does something that makes you sit on the edge of your seat – whether it’s a great tackle or an interception. The best thing about Webb is that he flies under the radar and seems to always be in the right spot at the right time. Not only does he get better each year, he gets better with each week.

So, tomorrow, whether you’re freezing at M&T or sitting at home trying not to spill beer on your Ravens snuggie – keep your eye on these guys. They’re sure to keep their breakout status running into the post-season. That being said, I’m leaving now before I jinx it….

Previous article VIDEO: Steve Downie Manages To Pick A Fight With Karl Alzner
Next article Believe it or not there is a game beside the Ravens on Sunday

For Ravens, Tonight’s Game In Detroit Is Make Or Break

The Orioles Are Winning The Internet (Or, “Hey, Remember The Ravens?”)