The Orioles hot stove finally started this past week with the signings of Jimenez and Yoon.  However, the Orioles should not be done at this point.   With the signing of Jimenez, the Orioles have already sacrificed their first round draft pick (#17).  The opportunity to sign an additional qualifying free agent would only cost them their #55 pick at this time.  Should the Orioles sacrifice their pick and go after any of the remaining qualifying agents?  Matt Sroka from Section 336 thinks the Orioles should covet their second round draft pick.  We here at Bird’s Eye View respectfully disagree.

We talked about this last year and broke out a multitude of formulas that could make your eyes bleed on the value of these draft picks.  In regards to the six year WAR, the Orioles would be expected to see the following return on average with the #55 draft pick:

With the 55th pick, we’re look at a 15% chance of the player being a replacement player, a 5% chance of him being a starter, and less than 1% chance of them being an all-star.  And with those odds, I raise the question of why not?  Why not take the risk now instead of rolling the dice once again in the draft?  But let’s examine the options to determine if they are worth it.

The options raised in terms of qualifying offers has included Kendrys Morales and Nelson Cruz.  However, there has been opinion that Justin Smoak or Ike Davis could be a valuable addition as well.  I’d rather break out the numbers a bit further and look at several other stats: 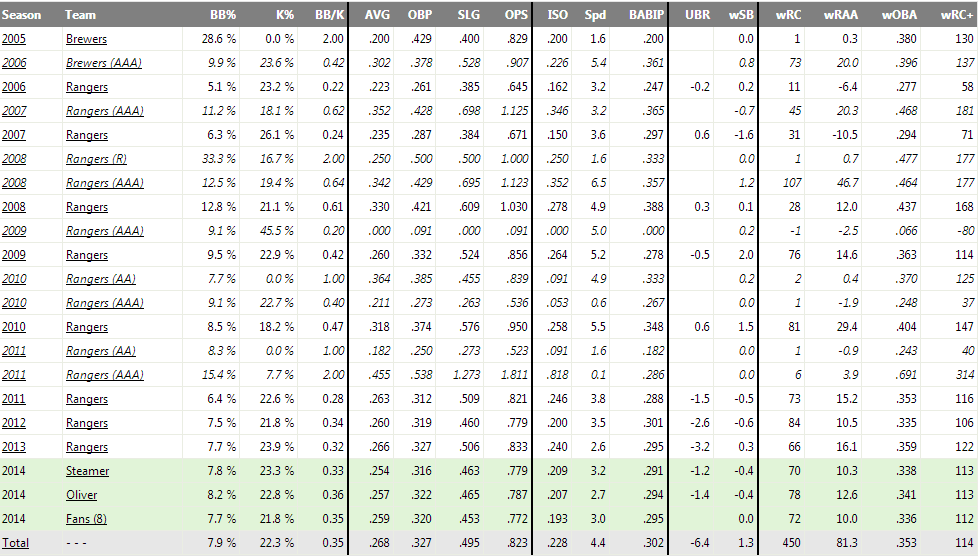 While the OBP is similar for each of these players, they could not be further apart in terms of actual performance.  Davis and Smoak both represent low batting averages with modest at best on-base percentage.  There needs to be emphasis on Davis and Smoak both projecting BABIP near .270 and with no track record in the majors of improving this to the average of .290 to .310 for the Major leagues.

Getting on base is not the only factor that the Orioles need to improve on from their DH position.  If we look at the use of wRC and wRAA, Morales outweighs all of these players for 2013.  Cruz would be there as well if you exclude the 50 game suspension for being involved the Biogenesis scandal.

However, I diverged from the argument about OBP being the critical aspect of these alternate players.  However, I would point out that the better statistic to use would be wOBA.  Once again, Cruz and Morales crush the competition in 2013 and historically have shown better numbers.

We also need to consider what the cost would be for trading for these players.  Rumors of Eduardo Rodriguez being the key for Davis would be a major sticking point.  I would emphasize the value of Rodriguez over a 2nd round draft pick at this time.

As for the internal options with the organization, the following individuals are mentioned:  Nolan Reimold, Steve Pearce, and Henry Urrutia.  Reimold has shown no ability to remain healthy.  Flashes of greatness are wonderful, but the season is a marathon.  I see no reason to depend on him for production, but rather as a bonus if he works out as a potential fourth OF.  Urrutia has options available and I don’t see any reason why the Orioles shouldn’t designate him to Norfolk to continue to work on his plate discipline and power that he demonstrated in the AFL.

Steve “Who the Hell” Pearce is an intriguing option if you just look the averages.  However once you break out his plate appearances and games, they don’t represent a significant portion for a 31 year old at this point in his career to rely on the data.  Pearce will make this team as an outfielder and back-up first baseman.  However, he cannot be your platoon DH as you hope for production to be consistent through a full season.

However, why am I even arguing about the draft pick?  The bigger issue is if the Orioles are willing to go past their $100 million resource allocation.  That may likely be the bigger objection rather than losing the second round draft pick.  However, it would be very interesting to see the Front Office make that move and tell folks to “BuckleUP” for 2014.  It’s time for the Orioles to get an above average DH in Free Agency.

Next article What Exactly Are The Orioles Getting With Nelson Cruz?

Dylan Bundy’s Rehab Timeline Is A Familiar One

Tonight’s Bad Forecast Could Be Good For Orioles

2014 Orioles: Avoiding The Tailspin of Losses