You can’t always get what you want. It’s a well-known phrase, and one that seems to define the 2014 offseason for Orioles fans.

Personally, I wanted the O’s to bring back Brian Roberts. I understand why they didn’t, but I would have liked to see #1 run down the Orange Carpet on opening day. Part of it is the emotional attachment. Like many fans, Roberts was a favorite of mine. Whether it was his boyish good looks, his propensity for hitting doubles, or his get-your-uniform-dirty enthusiasm, I loved watching him play. He was the only bright spot on a lot of bad clubs. And I wanted those clubs to win.

Even worse, I knew that there would be a moment when Roberts was introduced to the crowd at Camden Yards.

What I really didn’t want was Brian Roberts to make it easy to root against him. But he did. Consider:

No, you can’t always get what you want. But in this case, couldn’t the universe throw me a bone? 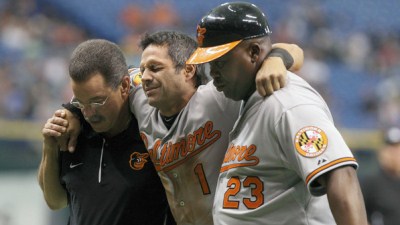 I also don’t want THIS to make me feel better…

Two On, Two Out: The Evil Empire Strikes Out