Supposedly, the players are to vote on the current collective bargaining agreement today put forward by both sides and the owners would follow suit. However, it seems some players are trying to make a money grab move and Minnesota Vikings punter Chris Kluwe didn’t really like it as he put his thoughts on twitter. 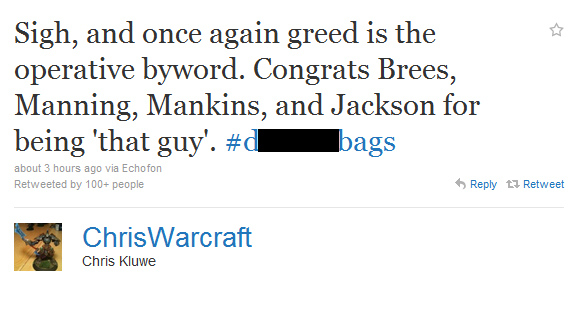 Judd Zulgad of the Minnesota Star-Tribune asked Kluwe if he was upset or just doing it in jest.

It’s like a mix of both. The thing is we’re so close to having a deal done and to kind of pull that at the last minute it feels kind of like blackmail. We all out the owners when they do crap like that and it’s only fair to call out our own people when they do the same thing. I’m against hypocrisy wherever it’s at. Just finish the deal up so we can get the season going.

Kluwe spoke what I think many NFL fans want to hear. They are tired of hearing about labor negotiations and greed from both sides. They want a deal signed and don’t want any hiccups to impede having football on their TV screens.

Terrell Suggs calls for Hines Ward to play versus Ravens

Ravens Report Card: Breaking Down The Ravens 38-35 Victory Over Denver

Here’s What Ed Reed Looks Like In A Really, Really Big Texans Hat