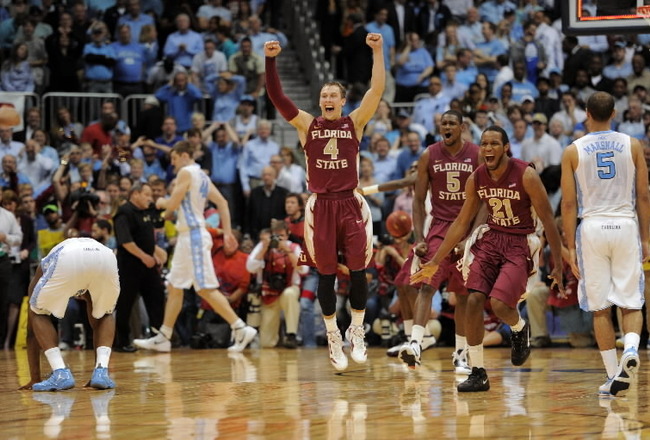 The number of ACC school playing basketball has now been whittled in half. Six teams are finished for the season-having been eliminated from the ACC tournament and not receiving and/or turning down bids to other postseason tournaments not nicknamed March Madness. Six do remain, though-and those six are all alive to compete for a championship. At least for a while, even if it’s only for a few days.

The Miami Hurricanes accepted a bid to the NIT, the lone ACC team in the 32-team field. They begin play tonight at home against Valparaiso, the regular season champions of the Horizon League. Those of you unfamiliar with the Horizon League, but are casual fans of college basketball this time of year may have heard of the Butler Bulldogs, the two-time national runners up in the NCAA tournament. Valparaiso plays in the same league. Should the ‘Canes win at home, they would face the winner of the LaSalle-Minnesota matchup, with site and time to be determined.

As for the five members of the conference playing in the NCAA tournament, the fun begins on Friday with opening (uh, excuse me) second round games. North Carolina State, the last team announced on Selection Sunday and one of the last teams in the field, kicks things off Friday afternoon with a game in Columbus Ohio against the co-champions of the Mountain West conference, the San Diego State Aztecs.  It will be interesting to see if State can shake off the frustration they felt after losing a close game against North Carolina to justify their inclusion in the tournament. Next up will be the Virginia Cavaliers, who will face a tough challenge from the Florida Gators of the SEC. Virginia finished the season shakily, losing five of the last eight games, but their defense will have to step up against a Florida team that loves to shoot the 3-point shot.

A few minutes later, Florida State, the ACC tournament champions, will take on St. Bonaventure out of the Atlantic 10. Andrew Nicholson of St. Bonaventure is a versatile big man who can play down low and step out and hit jump shots. The Seminoles make their name on defense, but with victories over Duke and North Carolina on their resume, they shouldn’t be worried about anything the Bonnies can muster. North Carolina steps up next taking on the winner of the first round matchup between Lamar and Vermont. The Tar Heels figure to have no problem with either team, but John Henson’s injury is a cause for concern going forward. Later in Greensboro, Duke will take on Lehigh, the Patriot League champions. They too, have an injury concern, as forward Ryan Kelly missed the ACC tournament with a foot injury.

ACC teams figure to be favored in three of the second round matchups, with Virginia-Florida a pick ’em game and North Carolina State probably an underdog against San Diego State. However, the beauty of the NCAA tournament is that just about anything can happen.

With the Super Bowl going North, Should Baltimore Get its Chance?